“The most rewarding part of the project was to know that what we did in our development department at Mezzanine’s head office in South Africa had a direct effect on the livelihood of households in Zambia.” 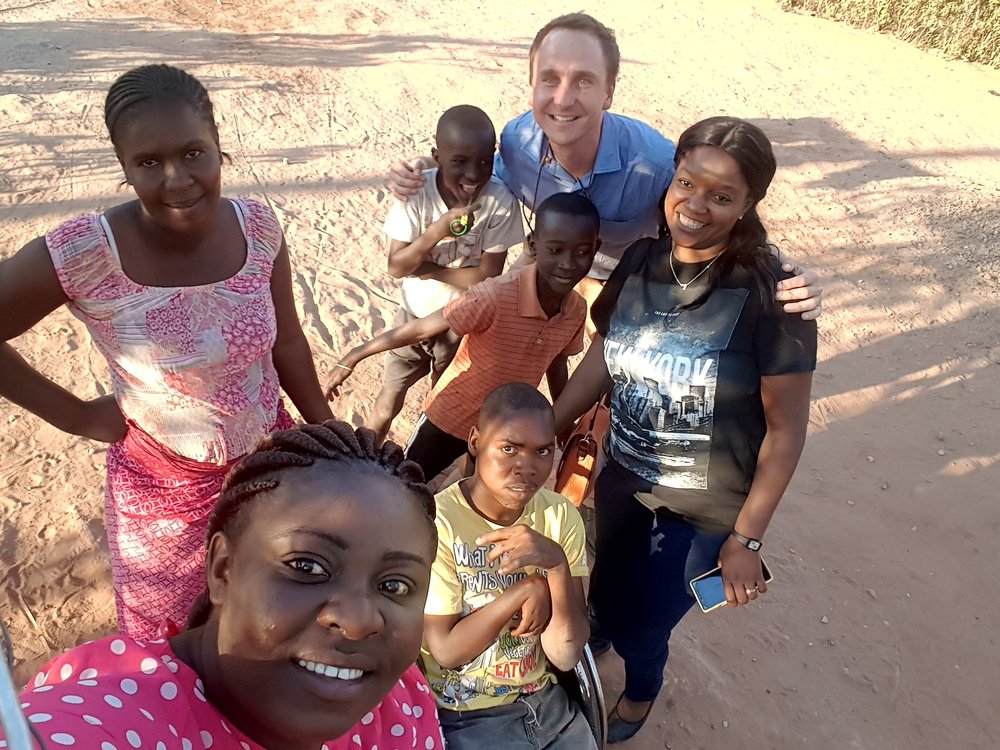 Enumerator, Hellen Bwalya, taking a selfie with Casper Strydom and the household she registered in Chirundu, Zambia (25 July 2017) .

The MCDSS launched an ongoing SCT project in 2003 to register and evaluate households in Zambia in order to pay government social grants to those who qualify. The project entails various stages of capturing and evaluating household information, followed by approval for those who meet the criteria.

It starts with Community Welfare Assistance Committees (CWACs) in villages and towns in districts across the country. These committees, consisting of 10 community members each, have knowledge about and insight into the circumstances of households in their area.

Also deployed in the districts, are the Ministry’s field workers, referred to as enumerators. Their role is to meet with the CWACs in their areas to identify and register households that might qualify for social grants. The enumerators then visit the identified households and assess them according to certain criteria to determine their economic status. The captured information is submitted to the applicable District Social Welfare Officer (DSWO), from where a process of validation and approval follows from district through to national level.

Until recently, capturing had been done on paper and the recorded data had been handled manually.

The World Food Programme (WFP) who pioneered this support to the Zambian Government, submitted a request for proposal in June 2016 with a requirement to digitize the process. Africonnect, a Vodacom Group company and Mezzanine’s local deployment partner in Zambia, was awarded the contract in November 2016. WFP and UNICEF were the primary funders of the initiative for the MCDSS. The project kicked off with a design workshop and signing off the scope of work in December that year. Mezzanine then completed the first version of the web and mobile application in time for the first Master Trainer training session that took place in May 2017.

The initial intention was to launch SCT as a pilot project first in only two provinces consisting of 20 districts in Zambia. This, however, changed during the training phase when the MCDSS realised the true potential of the solution and decided to launch SCT nationally right from the start. This immediately expanded the project to all 10 provinces consisting of 109 districts and with more than 1200 enumerators using the solution!

The SCT mobile solution’s objective was not to change the process, but to improve it and to package data in such a way that it would expedite the methods of capturing and analysing the information. This, without a doubt, had been achieved.

For the first 14 years since the launch of the SCT project in 2003 and before implementing the SCT mobile solution, enumerators only had a paper-based process to use when they registered beneficiaries in the field. During this time they were able to register 242 000 beneficiary households. Since going live with the SCT Registration mobile solution on 25 May 2017, five months later at the time of writing, the enumerators have already registered 421 000 households and 1,27 million people in maximising the project countrywide. These tremendous strides also reflect on higher levels within the Ministry. Previously it took around six months to capture the recorded data before being able to start analysing it. With the SCT Registration mobile solution the data is now instantaneously available.

But there’s more. Through the smartphone’s built-in location service, the GPS location of each household is now recorded (which also serves as proof that the enumerator indeed visited the location). It’s now also possible to include the signature of the head of the household at the end of the interview, together with a photograph of the person.

The SCT mobile solution is a native Android application with the technology located on the smartphone itself. This allows for an offline store and forward functionality, which prevents data and transaction loss during delays in transmission or when there is no network coverage. Enumerators are therefore able to register households even in the most rural locations where there is only intermittent network coverage or no coverage at all. 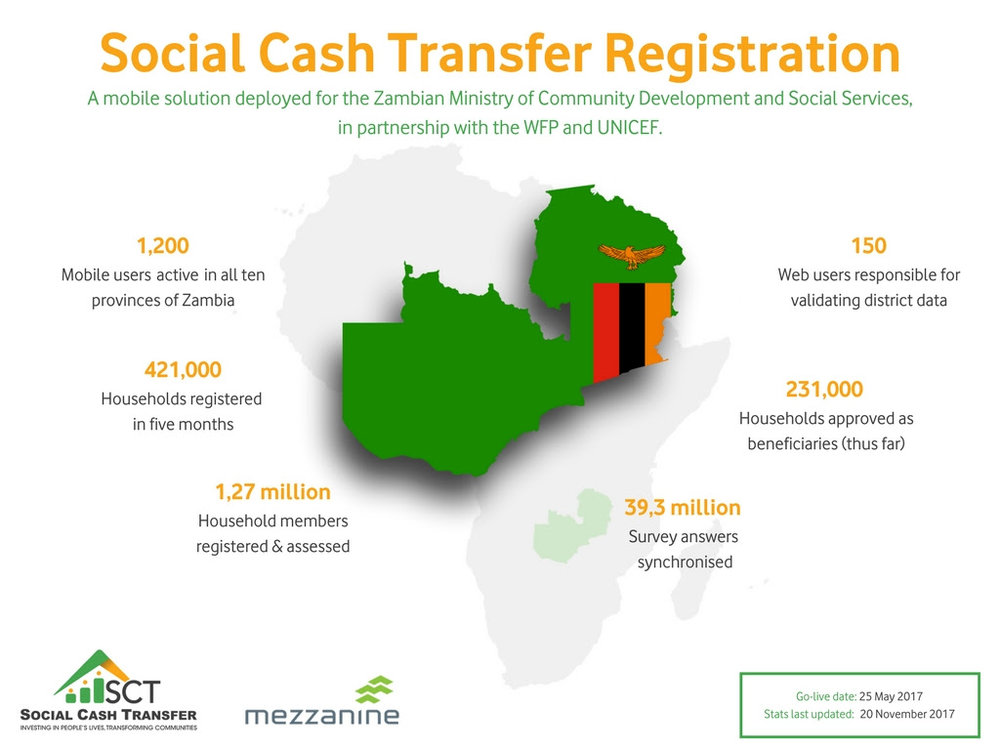 At the same time he acknowledges the input received from the MCDSS and the WFP and gives credit for their vision and willingness to accept risks in order to improve what they’ve had before, and for the role that they’ve played in the success of the project.

“Any mobile solution is at best merely an enabler for the people behind it. The SCT Registration mobile solution would not have been adopted with such vigour had it not been for the hard-working individuals on their side. It’s been an absolute pleasure to be working with the passionate and dedicated project implementation team from the MCDSS and the WFP. Their hands-on approach to deploying, training and supporting the web and mobile users in the field is something I will use as an example for years to come.”

When Strydom refers to the beneficiaries from the project, there is no doubt that this is where his empathy and passion lie. “The driving force behind the development team throughout the project had been an acute awareness that our output would have a direct effect on the livelihood of people in need. Every single household registration isn’t just another entry into the ever growing database – it is a household with people in need of a grant to survive under challenging circumstances. This awareness made us work long and dedicated hours and motivated us to make sure that each step along the way is done to perfection,” he adds.

But Strydom and the development team’s passion and dedication shouldn’t be seen in isolation. It’s merely a reflection of what Mezzanine stands for, a company that successfully works with its clients and partners in creating productive societies across Africa. Mezzanine views mobile technology as a major enabler for economic growth to change the lives of people on the continent. And with SCT Mezzanine has again illustrated that mobile technology is the only way to reach the last mile where it matters most, in this case, the less fortunate who are dependent on grants for their livelihood.